Something Should Be Done 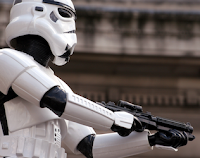 From time to time, generally in the days following a crisis, I hear people say, "something should be done." Most of the time this makes me cringe.

As a conservative, I hear this as a plea for more laws, more regulation and more government intervention in our lives.  And as a conservative I see most of these as a greater evil than the problems they try to "solve."  (And when I say, "solve" I really mean perpetuate because if they ever solved a problem, the program would be discontinued.)

But I had an epiphany last night.  My eyes were opened, and I saw the light about how to use the federal government's hammer of funding to solve a problem in a new way. So I am getting on board the "something should be done" wagon.  (As long as it is the right something.)

So here is my proposal.  I propose we have some new legislation.  I call it, "No Child Unprotected." And I think we can use some similar enforcement as the famous, "No Child Left Behind" law where current federal moneys are attached to some policy and assessment criterion.

Here is how this should work. The new law should require, that teachers take a concealed carry weapon's course each year.  (Eventually we can have one specially for teachers, but the one your state currently has for citizens is fine to start with.)  Pass an FBI background check to carry a weapon, and then carry a gun to school, and all school activities, all the time.  (There may be a few exception like a swimming teacher, but then there should be at least one armed school official there whenever there are students.) This program's goal is that there will never be a time in a school where our children can be gunned down like fish in a barrel and no one can shoot back.

I am sure that our law makers can take this simple idea that I articulated in a paragraph and turn it into a bill with hundreds or thousands of pages, but here is the thing, We don't have to make states that don't want teachers to carry guns do so, we just withhold all federal money from a state that fails to protect children this way. So they still have their freedom.

One objection that I see, is that some parents or schools may think that teachers might not be competent to carry a gun. Really? And we let them be teachers? If a teacher can't pass a CCW class and a background check each year, they should not be teachers. And if we don't trust them with a gun, why on earth do we trust them with our children? (I am really not criticizing teachers.  I believe that most of them are great people trying to go a difficult job as best they can. And I believe they would have no problem passing a background check or handling a gun responsibly.)

Another objection would be that these guns might accidentally kill students. While I this would be tragic, I think that we don't ban cars because people have accidents, and we don't ban pools and so many other things that have so much more accidental deaths associated with them, that this objection is mostly, if not completely, caused by misunderstanding and american people getting their information form poorly written movies.

At this point I can't think of any down side to this law. Can someone point one out?