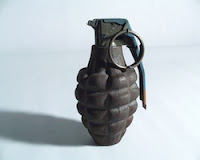 As some of you may know, I studied political science in college.  One day we started discussing terrorism. The class all agreed that terrorism is bad, but we had difficulty coming to terms with why any person or group would resort to it. It looked to us, as if it was the commission of violence for no purpose.

But that is not how the terrorist sees the act. He or she sees it as the last alternative open to achieve their political or other goals. Because it was the world of academics at the time, we reduced the process to an equation to determine if terrorism was the right choice for a given group of people or politics. But in English it is basically expressed like this.

"When all other, legitimate forms of effecting political change or achieving your political goals have failed or are closed to you, then terrorism, no mater how unlikely it is to achieve your goal, becomes the only viable option."

Basically, if you can't win, you try to make the other guy  or guys who are winning so uncomfortable, that they will decide letting you win is less painful.

Its not playing fair.

It is also a method of trying to resolve an unresolvable issue.

There is only one other option other than terrorism.  This option is suicide, or self destruction.

Lets take the emotions out of the dataset and look at the evils of pancakes as our issue.

In a case where a group of people want to wipe out pancakes as a food option.  They have this one, singular political and social goal. So their first stop is the legitimate avenues.

First, they get signatures and write legislators and try to get laws enacted to eliminate pancakes.  Of course this does not work.  When they finally get a ballot initiative, the public votes against it.  This avenue of achieving the goal fails, and looks hopeless.

Next, they may try to elect legislators that agree with them.  Or other means to change the government so that it is one that they can work with to achieve their goal of pancake elimination.  But the group is so small they lack the resources and the support to do this in an election,  or by a revolution.  This avenue of achieving the goal fails, and looks hopeless.

Depending on the area, and form of government, there may be a few other variations of how to make a law, or political change.  Lets assume that they try these as well, and all fail.  Appealing to the UN which normally will support all sorts of crazy agendas also fails.  It seems that all legitimate and accepted methods of achieving the goal are doomed to failure.

There are now two options.

They could give up.  This is the suicide option. The movement of pancake extermination self destructs and ceases to be.

Or they could resort to unpopular and illegitimate means.  This is the terrorism option. Blowing up IHOP, hacking pancake supporter websites, getting attractive movie stars to go on talk shows to tell people how pancakes are to blame for all of the destruction. There are many ways to play this end of the game.

And if the anti-flapjackers are persistent, and if they hold out long enough, it is possible that people may get tired of the fight. And when that happens, political change is at the door, and pancakes are doomed.

There is a famous quote by Ben Franklin that goes something like this, "Politics is the business of compromise." But people seem to missunderstand how to apply this.  Compromise does not mean, one person starts at 1 and another starts and 10 and they meet at 5.  This is meeting someone half way.  And it is a compromise, but not the only one.

It is not how all compromise works. One person starting at 1 and the other at 10 may also meet at 3 or 7 or 9 or 2 and still have reached a compromise. It is when one starts at 10, and the other at 1 and one or both parties refuse to move at all to accomidate or allow the other person or party to have any room for their view point, belief, preference etc.

Compromise is also not when one player says, "I'll meet you at 5." and then waits for the other person to be at 5 and wants to start negotiating for a new half way point. This is a compromise on only one side and is fake bargaining.

There are many ways to use this framework, but the only summary that applies universally, is this. If you don't think the other player or party will opt for the self destruct/suicide option, then you need to make room for them to exist.  Because the other option is terrorism. And that is a bad option.
Posted by Roy Hayward at 9:08 AM