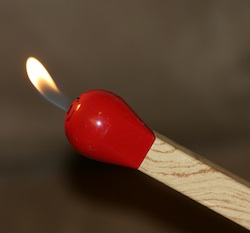 There are some conversations that have happened again and again. And just like a chess game with an opponent that has a favored opening move, you can develop a standard response. I have such a response when people are shocked that I dispute the existence of Global Warming.

I agree with them.

Yep, I know that this will warm the heart (if not the globe) for a few friends of mine, but I have decided to admit the existence of Global Warming. I just call it weather.

And once I have redefined GW as weather, the argument begins again. And it goes on and on. But for the sake of this post, I don't want to debate the religion of Global Climate Weather. For the sake of argument, lets assume that the priesthood of climate models is the gospel.

Lets instead talk about carbon. CO2 is one of the most common compounds around. The exchange of oxygen for carbondioxide or O2 for CO2 is the root of fire, respiration, and decomposition that allows all life to exist. Without CO2 we would not have life.

CO2 is not a greenhouse gas as understood by GW Evangilists. The thumbnail of the belief is this. Light enters the atmosphere, and heats the earth.  Then Greenhouse Gasses reflect the light and heat back into the earths atmosphere and prevent it from escaping. (Like entering a greenhouse in winter, and its warm there even though there is no heater.)

Now we get all sciency and I loose most people. A green house gas is a gas that absorbs heat energy from sunlight, and then radiates that heat. Most of the places that you can look this up either explain it very poorly like wikipedia or just want to list a bunch of gasses found in the atmosphere.  Ick.

Generally speaking all matter when heated, will radiate that heat.  (Molecules that are hot, vibrate.  When they bump into other molecules, they transfer some of this vibration to the other molecule. This is what you are feeling when you put your hand over a flame or other heat source.) All matter absorbs and radiates heat.

Some are better than others, this is why we have hot mitts and insulation.

The best green house gas will have two properties. First, it should be a gas that is found in the atmosphere.  This disqualifies heavy gasses like chlorine (its also poisonous) and really really light gasses like helium.  Second, it needs to a really good heat absorption and transference or radiation  ability. The best substance for this is water.

Oddly enough when you check out what the EPA has to say about this, they leave water out.  I guess they only care about the miniscule amount of gasses that humans influence minusculely, or they know that there is really no way to put a lid on all the bodies of water on the planet that are evaporating tones of water every minute.

(The counter argument that water only remains in the atmosphere a short time is odd.  I will contemplate this while I look a the accumulating clouds in the sky.  I wonder what they are made of?)

Anyway, why is it that CO2 is not a good green house gas. If you take CO2 and cool it way down, you can get it to form a solid. We call this dry ice.  And you can do the same thing with water.  Now if we set both of these out we will see something strange happen.

The ice will melt. Melting is a process where a solid turns into a liquid.  When ice melts it forms water.

The dry ice will not melt. It does something much ... er... cooler! It sublimates.  It changes from a solid directly into a gas.

Well, we can heat water and make it into a gas as well.  So what is the big deal?  Well the big deal is that if we have a cool surface above our heated water, we get this thing called condensation.  The water vapor commonly called steam, turns back into water, the liquid.

But no matter how cold of a surface we place near the dry ice, we can never get it to condense back into its solid.

CO2 will absorb the heat, but it is really bad at it compared to water vapor.

There are two more tricks I like to play with CO2.  If you heat up a tub of sea water, and a tub of dirt, they both emit CO2 gas.  In fact according to the Berkley Climate Models, all throughout history we can see that when the earth temperatures increase, there is a corresponding reaction of a rise in CO2 levels.

And GOD said, "LET THERE BE LIGHT." And there was light. And as the first rays of the sun touched the surface of the earth. Warming it. And releasing CO2 that caused a chain reaction killing the chances of any life on the planet.  And GOD said, "AWE SNAP. THIS IS NEVER GOING TO WORK."


If you look at the data, a rise in CO2 is the earths response to raising temperatures. If it didn't work that way, there would be no life here. There is life here, so this is how it works.

In spite of the overwhelming trend that CO2 levels rise in response to increased temperatures in the past, todays rising temperatures are caused by it.  This my friends is an amazing thing that no one seems to explain. (or even acknowledge.)

Okay, my last trick with CO2. Lets revisit the carbon cycle. Here is how it works.  Plants consume CO2 they breath it, and need it for pesky things like photosynthesis and making stems and leaves.  Just like we breath in oxygen (O2) plants breath in CO2 and exhale O2.

Next, are animals like you and me. We breath in this O2 and exhale CO2.  This cycle repeats, over and over.  Air moves stuff around, and we all have a pretty easy going tolerance for CO2 and O2 levels, or you would suffocate at night in a closed room with the window shut.

Plants also have a pretty easy going tolerance level. Just as humans are happiest at sea level with lots of O2 to breath, plants are happiest with CO2 levels that will kill us.  When plants evolved, or were introduced into the earth by GOD, there was lots of CO2 and very little O2.  And they thrived.

We still use this today. People that run green houses ramp up the CO2 level inside them to lethal levels to get the best growth out of their plants.  The best flowers and the biggest tomatoes come from an atmosphere that would kill us mammals.

The point here is that the earth, is just find with global CO2 levels 10 times what we are seeing today. We might not be happy there, but the earth, and the plants and the fish would all keep on keeping on.

But don't worry, we have such a long way to go that there is really no danger of this happening.  Not from anything Man is doing anyway. Volcanoes and asteroids are much bigger threats here.

So in the end. Yep, I admin Global Warming is real.  It is really part of the normal cycle of our planet, sun and solar system. Its the way God created it to work. Or its the way it naturally evolved. Or its the way the aliens liked it when they decided to settle on this planet.  But its is real, and really nothing to worry about.