And to complement the poem I wrote on Mother's Day, I penned this one for Father's Day.

Fathers are our special heros
They banish children's fears.
They slay our dragons with a song
And put and end to tears.

Fathers are our special teachers
They help us to stand tall
They carry us when we cannot walk
And lift us when we fall.

Posted by Roy Hayward at 9:52 AM No comments: 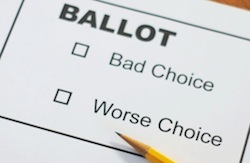 I know this is going to be news to people, but none of the government programs actually solve any problems. No really. They can't, because they were never designed to.

What would solving a problem look like? Well I have a favorite analogy about problems and their solution.  We start with a mountain path where people sometimes fall on the rocks below and die.

There are two proposals put forward.

Proposal one, is that we create an express ambulance service to transport fallen people to a special hospital that we also construct near by, so that when people fall, they can be saved.

Proposal two is simpler.  We build a railing by the path.

Current government programs on welfare, social programs like affirmative action, energy, safety, and the whole system all fall into the proposal one category.  There are no proposal two programs.

See when you solve a problem, it stops being a problem.  People stop falling off the mountain path.  And we all go on with our lives.  But we don't do this.  We never solve the problem of welfare, or racial inequality, or safety.  If we did, the bureaucrats would lose their jobs and have to find new ones.  So instead of solving a problem we simply put bandaids on them.

The blanket principle works like this. Programs that solve problems need to actually have steps to end themselves. Like, program X will do Y in 3 years, by using A, B, and C. At which point this program ends. If it fails to solve the problem also ends, because it has failed.

Oh sometimes we pretend to have a termination date. But when the day comes, we extend it, raise the limit on debt, and get a bunch of people that benefit from it to run around with picket signs and sob stories. Government programs never end.

My favorite rant about programs is our welfare program that is supposed to fight poverty. When we do the math, we are spending more money running the program than we have actual success at raising the standard of living of the program participants. In other words, it would be more effective to end the program, and just give the people cash.

But we are in love with these band aids. Most of them are so far removed from the original problem they were created for that we can't really tell what the purpose is supposed to be.

In the end it all boils down to money. And the solution is also money. Not more money, but less money. Reduce funding, or end funding two all programs that don't solve their problem in a year or two.  If you can't do something in two years, odds are that you can't do it.  So why keep paying them to try.
Posted by Roy Hayward at 11:33 AM No comments: