Legend of Stars started as a novel.  The novel evolved and become three. It is in the same universe as 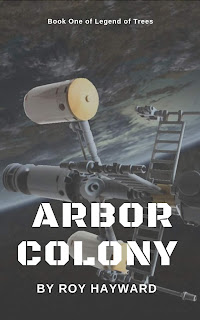 Essen Century (another story that I am writing).  As a science fiction story, the setting is a colony on a distant planet.

The scans and survey of the planet don't show much animal life, and the surface is almost entirely covered with trees.  So the colonists from Earth name the planet Arbor and begin to establish a colony.

Will these to forms of intelligent life be able to live together? Or will one have to dominate the other?  And more importantly, will humanity survive on Arbor? And if it does survive, will that even be a good thing?

"Arbor Colony - Book One of Legend of Stars" has been put together and comes out for sale on Amazon November 25th, 2016.

(Here is a scene from the first novel, Arbor Colony - Book One of Legend of Stars)

Here is a sample. A chapter called "Control Group."


"We meet again,"  Kevin said at breakfast as he sat down across from James.

"It’s getting old,"  James replied without looking up.

"Okay."  Kevin reposted. "Day ten of captivity as we join our subjects at feeding time."  He said in a mock announcer voice.

James laughed once. "You're right. It could be worse."

"I checked the boards before I came in,"  Kevin commented.

"Let me guess,"  James replied sullenly. "The quarantine is still in effect and we have no new information."

"Actually, there is some news,"  Kevin said making James look up suspiciously.  When he saw he had his full attention, he continued. "They are looking for a group of people to volunteer to break the quarantine,"  Kevin said, and then sat back to wait.

"To break the quarantine?" James said.

"And you want to volunteer?" James asked.

"I want us to volunteer,"  Kevin said excitedly gesturing to the both of them.

"So you want to stay here?"  Kevin asked switching to incredulity.

"No one has died." Kevin declared pointing his fork at James.

"Maybe you aren't bothered by being cooped up in here, but I am ready to get out and back to work,"  Kevin said.

"Well, I am not going to be a guinea pig."  James countered.

"If they needed test subjects, they don't have to ask," Kevin said imperiously. "Under protocol 17 they can do and use us as they see fit.  They can euthanize and dissect people in early stages of a disease if they deem they need the information to save the colony.”

"And I won't volunteer for dissection either,"  James said horrified.

"It won't be like that.  It's just a group of us that will be introduced into the same environment as the colonists that have already been exposed."  Kevin tried to explain more calmly, but he was clearly still excited to get out of confinement.

"Look."  Kevin started again, clearing his throat. "I thought you felt the same way that I did being cooped up in here for almost two weeks."

"I seriously thought you would be with me on this."  Kevin continued, avoiding James' eyes.

"Tell me,"  James said starting to get angry.

"I put both our names on the volunteer list,"  Kevin said softly.

"Why on earth would you do that?"  James exclaimed in despair.  It was really a rhetorical question.  James knew Kevin well enough now and had experienced his interference in personal matters practically on a daily basis.  The man seemed to have a natural inability to understand personal boundaries.  And the quarantine had made this trait more pronounced.

"What aren't you telling me?"  James demanded.

"Have you noticed how few people are in this dining area?"  Kevin said softly and looked down.

"Well, the medical team assigned all of the volunteers to a separate dining shift so that we can be gradually introduced,"  Kevin explained.

"You mean exposed,"  James said with an escalating apprehension.

"We get to leave here and go outside," Kevin said hopefully.

James stood up. "I have to leave."  And he moved to the doors back to the apartments.  He swiped his access card, and the light above the card reader glowed red.  Red indicated that the door would not open.  He swiped his card again. The light remained red.

James turned back to face Kevin who was standing now as well. "It's too late."

The doors to the outside opened and some medical staff in environmental gear entered from the exterior doors.  "Thank you for volunteering.  I have new living assignments for each of you.  Please step forward as I read your name."  Said one of the staff with a datapad.  She began reading names.

James ignored the medical staff.  He balled up his fists and took two strides toward a scared looking Kevin and hit him square in the jaw. Kevin received the blow flat footed and tumbled across a table.  James leapt after him.

Most of the people in the dining area were too stunned to do or say anything.  James grabbed the front of Kevin's jumpsuit and hauled him up, then slugged him again.  This time in the stomach.  Kevin folded with a grunt.

James started to pull him up to hit him again when two of the medical staff grabbed him and pulled them apart.

A man in protective gear forced himself in front of James. "What is wrong with you?"  He shouted at James.

"I didn't volunteer!" James shouted back. "He put my name on the list."  He said pointing at Kevin who was looking sheepish and bleeding from his mouth.