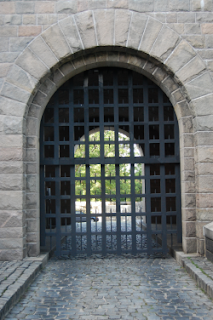 We waited in the rain for the trumpet to sound. The Water poured off our armor and ran in an army of rivulets in the damp packed earth. It ran, as best it could, between the feet of the army that stood on that earth. Stood waiting.
The gate had been closed for days. They had know we were coming. Mostly because we had told them. But they were expecting a seige. Sieges that lasted weeks or months before the army or city would surrender.
Our commander didn't do sieges. He had a different way. A faster way.
The trumpet sounded and we began to march. But as we march, a single man on a horse, rushes forward. He zigzags a course toward the enemy gate.
A hail of arrows are launched at him, but in the rain he his hard to target.
Raicing forward reaches the gate, and tosses the bag he is carrying at the foot of the gate. Then he turns and retreats toward our line using the same zigzag pattern.
Once he drops the bag, a drum behind us begins to beat. We keep marching forward. We march in time with the drum. Then suddenly the drum beat stops, and the entire mass of men drop to one knee, and bring shields up to bear.
And in the next heartbeat there is a loud concussive boom. Followed by a shower of rocks and splinters.
Again as one, the army rises to its feet and begins to march. There is a hole where the enemy gate used to be.
A small pile of rubble has mostly fallen into the pit excavated by the explosion. More stones from the wall threaten to fall into the gap. There are still men manning the walls and they begin to shoot arrows at us. But the shock of this tactic is one of its move effective attributes. Some squads are retreating while others hold their ground.
Even if they regroup, they will no longer be as effective as they would have been. The city was not prepared for the wall to be breached today. There will be supplies just inside the walls, and people will not be well equipped for hand to hand fighting having mostly bows and long range weapons.
Today, the city will be ours.
Posted by Roy Hayward at 10:53 AM No comments:

I have taken the plunge

Actually I took it two weeks ago. I completed and submitted a short story for publication with an online magazine.
I am very excited about it.
I wrote a post a while ago called "Periculum" that received a few, select, encouraging comments. These encouraged me enough to revisit the story. The draft you can read on this blog, is a very old draft. The story is now a 6,000 word short story.
Currently it is "under consideration" at Strange Horizons. According to their submission policy, I will find out one way or another in the next 65 days.
I know that the odds are not great, but I am still hopeful. In the mean time, I have started two new short stories. One is called "Given Enough Time" as is a story about time travel. So far this one is still in an early draft and may be a very very short story.
The second one was inspired by Kiersten White. Its current title is "Zombies and Unicorns" and this is a "new" type of story for me. My daughter loves it.
I truly hope this type of fictions does NOT turn out to be what works for me as a writer.
More to come as I keep writing.
Posted by Roy Hayward at 11:49 AM 1 comment: