What if we are wrong? 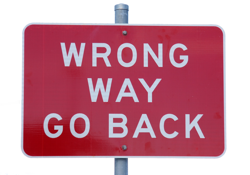 I just listened to an intriguing podcast from Freakonomics Radio. It was on making predictions. And they talked about a bunch of things. They had, as one of their guests, Philip Tetlock who is an expert and researcher of people that make predictions.  And he basically said that people who are dogmatic in their views, were poor at making predictions. (among other things.) After some discussion he made gave a simple test to uncover dogmatism.

"What would it take to change your mind?"

People that can't readily answer this question, haven't generated any opposing views of the topic they are predicting. If you can't answer this question in a reasonable amount of time, then you are probably dogmatic in one way or another.  (You hare committed to your view.  Or you listened to someone else who is committed to their view and not considered the issue further.) Either way, this makes you a poor predictor.

And at this point my mind began to race as I thought of myself. What discussions and arguments do I engage in that I don't adequately consider alternatives to. A few pop up;  Global Warming ('climate change' to you syntactical waffelers. ) Minimum wage. Second Ammendment Rights. And government regulation of things.

So here is the question. "Roy. What would it take to change your mind about Global Warming?"

This is a dangerous question. Because if I answer it, I'd need to really be willing to change my view. And that might be embarrassing.

But here are the answers.

1. I'd need to see a series of years where we could find regional average temperature increases from year to year on all regions. (Basically I'd like to actually see global warming happening.)  This is not a single or couple of regions, but all regions, increasing every year, for more than three years, (actually, lets say 10 years.)

2. I'd like to see some record in the geological record where temperature increases trends happened after a CO2 increase. According to the data as presented by Berkley's climate modeling data, all historic data points to a CO2 increase following a warming trend. So lets find some time that it has happened before, like we are saying it is happening now.

Okay, I think I've done it. There is what it would take to change my mind.

Now if you are an adherant to Climate Change or Global Warming, please answer the same question.

"What would it take to change your mind?"
Posted by Roy Hayward at 9:54 AM