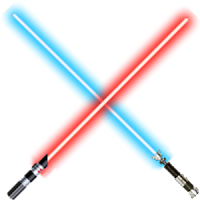 This has definition and its one of the classic logical fallacies: The false dichotomy.

Basically it works like this, a question of which of two options will you choose is presented. And accepting the question leaves you will only the two stated choices.

But in an effort to be persuasive, people state these dichotomies with one choice being the one they prefer people choose and the other being something they know or hope that no one will choose.

"Give me liberty or give me death!"

"Well, we don't want to kill him, so I guess we have to let him go." Really? These are really the only two options. We can't just lock him up and wait for a better option? Or we could torture him or make him watch reruns of Happy Days until he breaks. There are truly so many options here.

If you accept the set of choices as finite and only two. And you accept the choices placed before you, then you will have to pick one. And if you then pick the least terrible choice, you have been persuaded.  Congratulations.

"I clearly cannot choose the cup in front of me."

"So you've made your choice then?"

"Just wait till I get started."

And as we see in Princess Bride, he distracts his opponent and then switches glasses. Thus proceeding to pretend to drink until he sees his opponent drink. A brilliant move unless your opponent is immune to iocane powder.

For the last several months, and almost on a daily frequency, someone has told me that if I don't vote for Trump or Clinton, that I am voting for the other one. This dichotomy of options is false. If you have ever voted, you know there are more than two candidates on the ballot. So factually, there are multiple choices.

Then there is always the option not to vote. This is an important option that I support for people that choose it. (And yes, they still get to complain.)

There is the options to immigrate to Canada. It is an option.

There are so many, I'm not listing them all. But to pretend that if you're not voting for my candidate you're voting for the enemy is a Sith attitude.

I know that, "All it takes for evil to triumph is for good men to do nothing." but I tell you know, that voting for someone other than a Democrat or a Republican is not doing nothing. It is most certainly doing something.